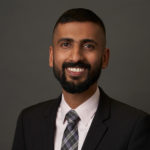 Prior to joining Immigration Equality, Amitesh was a Senior Associate at Pu-Folkes Law Group, where he worked on direct representation of clients in affirmative and defensive human rights, family, and business-based immigration applications. As a Senior Associate, he focused his work on waivers of inadmissibility and responses to complex Requests for Evidence. Before working at Pu-Folkes Law Group, he was a Policy Fellow at the National Center for Lesbian Rights where he worked on expanding the definition of sex discrimination and was also a legal fellow at Transparency International USA, where he worked on issues around third-party anti-corruption due diligence.