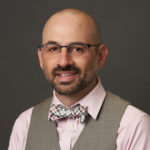 Aaron first joined Immigration Equality as a Pride Law Fellow in the summer of 2004. After law school, he volunteered with the organization whenever he could, joining as a staff attorney in 2008. Aaron is a graduate of the American University’s Washington College of Law and the University of Oklahoma. Before joining Immigration Equality, he was a staff attorney in the Office of Legal Affairs of the United States Court of Appeals for the Second Circuit and an associate at the law firm Masliah & Soloway.