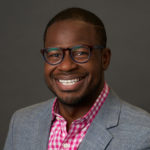 Prior to joining Immigration Equality, Sidney was Director of Development for the New York Urban League where he oversaw their $2.6 million fundraising department and helped grow and diversify their funding streams.

During Sidney’s tenure at Helpusadopt.org, he increased their fundraising from $300,000 to nearly $1M. In addition, he expanded Helpusadopt.org’s funding streams to create a well-balanced development office. Sidney has also been part of growing development operations at Harlem School of the Arts where he helped them through a $1M campaign as Individual Giving Manager. At Planned Parenthood Federation of America, Sidney worked in their Foundations and Corporations Department, where he developed their foundation fundraising strategy which resulted in $60M+ in foundation and corporate support. Before that, as a development consultant he worked with the American Radio Choir to increase their visibility within the community, and was a Program Associate at Community Works, where he increased their revenue by 3% with a direct mail campaign, e-blasts and an enhanced website presence.

Sidney is a graduate of Stetson University – GO HATTERS! He holds an MBA and undergraduate degree in Vocal Performance – Opera and elective studies in Business Administration.